Arvind Swamy one of the famous and versatile south Indian movie actors, besides that he is also a playback singer and mostly performs in a Villain role in movies. He did many blockbuster movies in his career.

Arvind Swamy is one of the most famous and versatile actor, model, producer, entrepreneur, and television presenters who work generally in Tamil movies. Roja, Bombay, Minsaara Kanavu, Alaipayuthey, and Chekka Chivantha Vaanam are some of the best from hit movie collection.

He started her career from modeling and debut from Thalapath in 1991.

Family: Arvind belongs to a Hindu family background, His mother named C.V.S.Vasantha Swamy who is a Bharatanatyam dancer and father is a well-known industrialist of Tamil Nadu, named Venkatarama Doraiswami Swami.

After that, he entered Loyola College, Chennai for higher education. He also joined Wake Forest University -North Carolina, the US for getting the degree of Masters in International Business. He completed his graduation from Commerce stream.

Arvind did two marriages in his life, first with Gayathri Ramamurthy

(married 1994-2010) and After a long relation, both couples got divorced and Married to Aparna Mukherjee who is a lawyer, (married 2012). He has two children, one is a son named Rudra Swamy, and the other is a daughter named Adhira Swamy.

Before started his career he was a businessman. He started his film career debut from Thalapathi whose director was well-known Mani Ratnam. After that Arvind did two movies in 1992 Roja and Bombay which becomes again a blockbuster movie. Arvind honored by National Filmfare Award and State Filmfare Award for Best Actor.

After that, he is also honored by Time Magazine.

Besides this, he also performed in Tamil movies and gave blockbuster movies that gave him several awards.

For the movie Minsaara Kanavu (1997) which was a super hit movie, he got again national award for that movie on behalf of his better performance.

Due to his influence with a small injury, he got retired from his filmy career and come back in Kadal (2013) directed by Mani Ratnam, for this movie Arvind lose his weight to 15 kgs.

IIFA Utsavam Award for Best Performance in a Negative Role

Arvind Swamy potryed her iconic negative role in Thani Oruvan movie in 2015 as a role of Sidharth Abhimanyu. 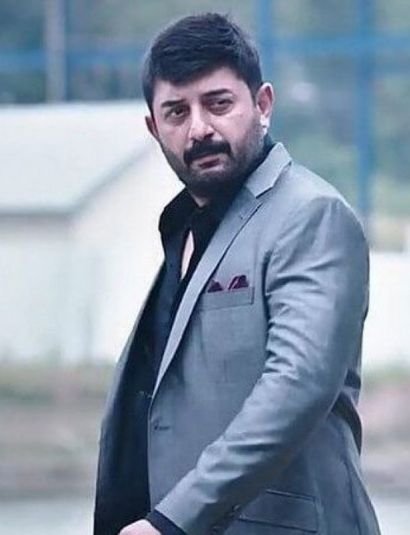 TV presenter: He hosted this season of the game show, Neengalum Vellalam Oru Kodi in 2012.

In 2019, he potrayed himself as Chief Minister of Tamil Nadu ‘MGR’ in the movie named Tahlaivi starrer with Kangana Ranaut as she performed in a lead role. This movie is based on the iconic politician, Jayalalithaa biopic.

Basically salary and net worth never revealed in front of publically but from media sources, we assume his net worth approx $20 million (Rs . 2 Crore).

Arvind Swamy Son, Wife, Age, Tamil Mp3 song Download, Movies, Instagram, As MGR, Father, Net Worth, Height in Feet, Family, Wife Aparna Mukherjee, Daughter, Awards & Achievements. Check out some more facts that you need to really know about it if you are one of his fan. Would you like to see more about biopic of Amala Paul, Allu Arjun, & Ram Charan.

Hobbies: He likes to read books, paint, online gaming, and playing chess in his free time.

Arvind’s main ambition in his life to become a doctor, and did modeling for extra income at his college time.

Then at the first sight of Mani Ratnam famous director on the magazine cover page, called him for a meeting and granted him an offer of a film.

During divorcing time, he paid Rs. 75 lakhs as settlement money to his wife.

After getting injured he took retirement from the film line and gained huge weight, again appeared in 2009 by losing 15 kgs weight.