Madhuri Dixit is a well-known personality in Bollywood film industry and well known as Dhak Dhak Girl, she entitled with this tag on behalf of her song, Dhak Dhak Karane Laga from Beta movie. She is a well-known television personality, music artist, and Kathak Dancer. She was iconic artist who potrayal since the 70s in Hindi cinema.

Madhuri Dixit is one of the most popular actresses and a living legend. Madhuri’s full name is Madhuri Shankar Dixit and her nickname is Bubbly, Dhak-Dhak Girl, after getting married to she got the name Madhuri Dixit Nene. Her ethnicity is hmin.

Madhuri Dixit was born on 15 May 1967 in Mumbai, Maharashtra and her current age is 53 years as of 2021. Her nationality is Indian before marriage after marriage she got her nationality as American. Her birth sign is Taurus, home town is in Mumbai and her religion is Hinduism.

Madhuri Dixit’s father was Shankar Dixit and his Mother’s name was Snehlata Dixit. She has two sisters named Rupa, Bharati and one brother named Ajit.

It will get a surprise to all of you that the girl who ruled on Bollywood industry and became the number one heroine, she was actually wants to become a microbiologist.

She completed her microbiology studies from Mumbai University and after that got training in Kathak dance.

Madhuri Dixit started her career from her debut movie Abodh (1984) in Rajshree Productions. Most people praised her acting but this movie could not able to make her a superstar.

She potrayed in a small role sometime then after the best luck is waiting for her and change Madhuri Dixit life completely when N. Chandra was made Tezaab movie in 1988, starrer with Anil Kapoor.

This was the movie that made her a superstar and left behind all the heroines and became number one heroine.

After that, she appeared in Dil starrer with Aamir Khan, directed by Inder Kumar and this pairing was again hit. On behalf of her better acting in this movie, she also awarded by best actress award.

As like she got her stardom in her life, with this controversy surrounder her also. In the movie Dayawaan, she made an intimate scene with Vinod Khanna.

Then again she was ready to make history with Salman Khan in Hum Aapke Hain Koun whose director was the same film production house with which Madhuri Dixit had started.

She was also seen with Sanjay Kapoor, Anil Kapoor’s brother in the film Raja.

We don’t forget about the movie Dil To Pagal Hai, starrer with Shah Rukh Khan and Karishma Kapoor in 1997. This movie changed everything.

But in 1999 she broke thousands of hearts when she got married to Dr. Nene. After that, she settled in America, and she born with two boys.

But after marriage, she again appeared in Sanjay Leela Bhansali Movie in Devdas, in 1999. In this movie, she portrayal the role of Chandermukhi.

Again she comes back from her movie Aaja NachLe, the film was not performed well at the box office but it gave a comeback to Madhuri Dixit.

She also appeared in several reality shows and tv shows.

Madhuri Dixit’s name is also noteworthy with great painter M. F. Husain who was considered himself as a big fan of Madhuri Dixit. It tells about that he had watched 67 times Hum Aapke Hai Kaun.

Madhuri became one of the most nominated actresses who have sixteen nominations in the category of acting. She achieved fourteen times Filmfare Award for best actress. She also honored by Padma Shri which awarded by the Government of India in 2008.

Kalabhinetri Award by the Government of Andhra Pradesh in 1997

Due to covid-19, her upcoming project postponed for six months.

Madhuri Dixit’s approx net worth is $ 35 million and she charges per movie 5-6 crore INR. 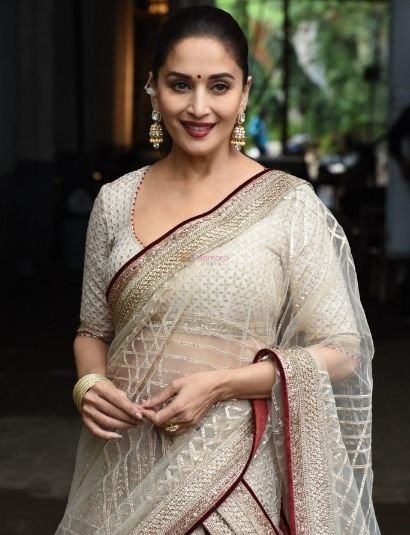 Favourite Book A Quiver Full of Arrows by Jeffrey Archer

She was a close friend of Cricketer Ajay Jadeja.

Besides Hindi movies, she also potrayed in Marathi movies.

Before entering in Bollywood industry we want to become Microbiologist.

In 2013 she started her own dance academy named Dance With Madhuri.

The government of India made him brand ambassador of Beti Bachao Beti Padhao campaign.